The Industrial Revolution in the 21st Century When You’re a CEO, You Don’t Have Time to Play the Victim

Angella Nazarian: A Vision in Good

The Visionary Women co-founder, bestselling author, and philanthropist doesn’t just lean in–she gives other women her shoulders to stand on and is poised to make her nonprofit a powerhouse in female leadership

Ask Angella Nazarian if your wildest dream is doable and her answer will likely be, “Why not?”

Born and raised in Tehran during the Iranian Revolution, Nazarian’s thirst for knowledge, focus on mentorship, and deep interest in human relations are the impetus behind her success as a best-selling author, philanthropist, and co-founder of the Los Angeles-based nonprofit Visionary Women. Poised, gracious, and whip-smart, with boundless energy and enthusiasm, Nazarian makes anything seem possible.

“Given the fact that I came from a background where women were not working outside of the home, I had a hard time finding someone that I could relate to. Someone I could pinpoint and say, ‘That’s the kind of woman I want to be,’” says Nazarian. “Mentorship is not only for young people; it is so important for anyone, even for those who are in their 50s or 60s.” She credits her can-do attitude to her Persian background and watching her parents start over after moving to the United States.

The Power of Stories

Nazarian’s first book, Life as a Visitor, a memoir about moving from Iran to Los Angeles, describes her innate desire to create opportunities for herself. In high school, she left Iran on her own to live with her older brother and sister in Los Angeles. Her parents would not arrive for another five years. She later attended UCLA, where she met her husband, founder of Nimes Capital, David Nazarian, who shares her views about philanthropy.
By the time she was writing her final thesis for her master’s in psychology from Cal State Long Beach, a need was developing to foster something more meaningful in her life by helping others. “I was researching organizational behavior, which is the intersection of psychology and social psychology as applied to work and teamwork. ‘What happens when you bring people from other backgrounds together?’” she says. After several years as a psychology professor, Nazarian realized that her needs and desires had shifted to wanting to help other women make positive changes.

For the next seven years, she met weekly with two groups of women to discuss their involvement in leadership and social issues, meetings she calls “transformative.”

“That’s when I realized that everyone yearns for some kind of meaning in their lives,” she says. “Inspiring people and affecting change is usually through story. People respond to genuine, heartfelt stories.”

As Nazarian was interviewing the 20 iconic women featured in her second book, Pioneers of the Possible: Celebrating Visionary Women of the World, she invited them to speak about their work and discuss how they achieve balance in their lives. It became abundantly clear that she wasn’t the only one who sought to connect and have impactful conversations with people from different backgrounds. The first event she produced, an all-day salon hosted at SLS Hotel in Beverly Hills, not only sold out but by the following day her email in-box was flooded with messages asking about the next one.

Wallis Annenberg, a friend and the president, CEO, and chairman of the board of the Annenberg Foundation, urged her to set up the salons as a nonprofit.

“You need to build a tribe around yourself, a sisterhood,” Nazarian says. She took Annenberg’s advice and enlisted friends, including two-time former mayor of Beverly Hills, Honorable Lili Bosse, philanthropist Veronica Grazer, and Honorable Nicole Avant, to plan events and bring others into the fold. According to Nazarian, 97% of money that Visionary Women earns from memberships funnels directly back to its programs.

“We called this a startup nonprofit, but in the last three years we have given $800,000 to women in need. We want to close in on $1 million in the next year.”

At a sold-out book signing

Last year, Visionary Women launched an Under 35 (UE35) membership, which gives younger female professionals the opportunity to create their own events, secure speakers, and recruit members to discuss issues specific to their demographic. “There is something so moving when you see that kind of energy in people who want to make something of their worth,” says Nazarian. “They are inquisitive, want to make connections, and get involved. I think it’s important for these women to find their own voice.”

Nazarian’s relationship to giving is one of active philanthropy. She, along with her family, believes in giving large projects love, time, and support. For example, the David Nazarian Gift, a $10M donation and $25M fundraising drive for her husband’s alma mater, Cal State Northridge, extends beyond dollars to elevate entrepreneurship and foster international programs, with a focus on women in business.

“It makes you level-headed, not thinking about yourself and your own life. This is something we ingrained in our kids with our family foundation. It has to be a part of our lifestyle,” Nazarian says.

When most of us are still counting sheep, Nazarian is reflecting and writing. Never having written anything beyond research papers, she dove head first into creative writing classes at UCLA. What she didn’t expect was to regain pieces of her history, pieces she wanted to document and share with her children. Her first book she describes as “accidental.”

“I wasn’t attached to it being published. Whatever I decide to invest in, I want to do a good job, so I took it very seriously,” she says.

Her second and third books focus on women’s leadership, chronicling the lives of pioneering women in different disciplines, countries, and socioeconomic backgrounds. “Instead of writing a biography, I was most interested in what made them successful, and commonalities between women in different parts of the world that made them flourish. They have been the engine behind my work in women’s leadership,” she says.

Her forthcoming book, The Power of Partnerships, delves into the dynamics of noteworthy male-female partnerships and includes an interview with Associate Justice of the Supreme Court Ruth Bader Ginsburg about her marriage to her husband, Martin, as an example of a strong and loving partnership. Nazarian recognizes that the #MeToo movement has made this a timely topic, as we reimagine how men and women work together. “Is there a different way that men and women relate to work? If so, how do they complement each other, and where do we go from here?” she asks.

Now that her children have left the nest, Nazarian says she’s working more than ever. It has also afforded time to travel and write more frequently. “In different parts of your life cycle, there are discussions about having it all, and I’ve always said that you can have it all but not all at the same time,” she says. To balance her roles as businesswoman, philanthropist, writer, speaker, wife, and mother, she meditates and gives time to herself every morning around 5:30 a.m. “The first two-and-a-half hours of my day are spent in quiet reflection, which is medicine, I think.”

Another elixir for Nazarian is flamenco dancing, which she has been practicing with twice-weekly classes for the past 10 years. “It has become one of the more important things in my life, as it ties back into my hobby of dancing in my childhood,” she says. “Aside from meditation, it is one of the only times when I’m not really thinking,” she says. “You cannot think while you are dancing. It’s all muscle memory and you have to be so present.”

Nazarian attributes her ability to work hard to a positive state of mind and quality time with loved ones. “Spending time with my sons, family, and good friends is so nourishing. I always make time for that,” she says. “I don’t want to feel that all my worth is in the doing but being with people.”

Looking to the future, Nazarian’s goals are, unsurprisingly, far-reaching, but for her, no doubt attainable. She aims for Visionary Women to be a major force in Los Angeles by supporting new programs such as UE35, increasing the number of collaborations with other nonprofits, and building a national membership, in addition to extending help and hope beyond LA’s city limits and into developing countries. Passing the torch to a younger generation is her end goal.

“My only wish is that, 10 years from now, they are going to be running Visionary Women.” With Nazarian’s magic touch for connecting and inspiring others, everything seems possible. Why not?

On My Wrist
“BRACELETS THAT MY CLOSEST FRIENDS HAVE GIFTED ME.”

In My Garage
Tesla

First Job
AT AGE 13, A CHEMISTRY AND MATH TUTOR AND AT AGE 23, A FACULTY MEMBER IN THE DEPARTMENT OF PSYCHOLOGY AT CAL STATE LONG BEACH

Business NEtworks & Associations
“MY HUSBAND AND I BELONG TO THE YOUNG PRESIDENTS’ ORGANIZATION—OVER THE PAST 20 YEARS, WE HAVE LEARNED AND EXPERIENCED SO MUCH WITH THIS GROUP OF PEOPLE AND MANY HAVE BECOME OUR CLOSEST FRIENDS. WOMEN MOVING MILLIONS IS AN INTERNATIONAL GROUP OF PHILANTHROPISTS WHO HAVE PLEDGED TO DONATE $1M OR MORE TOWARD WOMEN AND GIRLS’ INITIATIVES. THE NETWORK OF INCREDIBLE WOMEN AND THE RESOURCES AND LEARNING AT OUR DISPOSAL HAVE BEEN INDISPENSABLE.”

Mentor
DR. CAROLYN CONGER: “SHE HAS BEEN MY TEACHER AND FRIEND FOR THE PAST TWO DECADES. SHE ENCOURAGED ME TO LEAVE ACADEMIA AND BEGIN BUILDING WOMEN’S COMMUNITIES OF LEARNING.”

Notable Upcoming Projects
“MY FOURTH BOOK, THE POWER OF PARTNERSHIPS, WILL BE PUBLISHED IN FALL 2019.”

Notable Past Events
HOSTING LIBERIAN NOBEL LAUREATE AND WOMEN’S ORGANIZER LEYMAH GBOWEE; HOSTING LEGENDARY PRODUCER BRIAN GRAZER AND NETFLIX CHIEF CONTENT OFFICER TED SARANDOS ON THE EVOLVING ROLE OF WOMEN AND THE FUTURE OF STORYTELLING; INTERVIEWING SADHGURU, A MYSTIC AND SOCIAL ACTIVIST, CONSIDERED TO BE ONE OF THE 50 MOST INFLUENTIAL PEOPLE IN INDIA; HOSTING TWO OF CONTEMPORARY ART’S MOST NOTABLE FEMALE ARTISTS—CATHERINE OPIE AND MARILYN MINTER–WHO SHARED THEIR APPROACH TO FEMALE ICONOGRAPHY AND HOW FEMINISM HAS INFLUENCED THEIR WORK AT THE MARCIANO ART FOUNDATION

Notable Upcoming Projects
“WE ARE LAUNCHING A MENTORSHIP PARTNERSHIP WITH ALLIANCE, WHICH IS THE LARGEST CHARTER SCHOOL NETWORK IN LA AND LARGER THAN 75% OF ALL SCHOOL DISTRICTS IN CALIFORNIA. WE ARE LOOKING AT WAYS IN WHICH WE CAN SUPPORT THEIR MENTORSHIP PROGRAM THAT HELPS THOUSANDS OF LOW-INCOME, HIGH PERFORMING STUDENTS. WE HOPE TO BRING THESE MENTORS AND THE STUDENTS TO OUR EVENTS AS WELL. IN LOS ANGELES NO CHALLENGE HAS BEEN IN THE PUBLIC EYE MORE THAN HOMELESSNESS. IN 2018 THE GREATER LOS ANGELES HOMELESS COUNT REVEALED THAT THERE ARE NEARLY 53,000 HOMELESS PEOPLE, 31% OF WHOM ARE WOMEN. WE ARE KICKING OFF THE YEAR WITH A SPECIFIC INITIATIVE CALLED ‘IN HER HONOR,’ IN WHICH MEMBERS’ DONATIONS CAN HELP HOMELESS WOMEN GET JOB TRAINING AND COUNSELING TO BECOME INDEPENDENT AND SELF-SUFFICIENT. THIS PROGRAM IS IN PARTNERSHIP WITH CHRYSALIS, WHICH HAS BEEN AT THE FOREFRONT OF THIS ISSUE.” 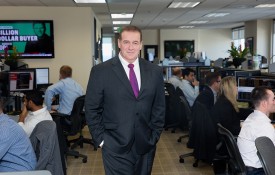 David Renzer: Bringing Spirit Music Group to the Next Level