Gillian Zucker’s fascination with sports was ignited by a visit to Yankee Stadium with her father, a physician, when she was 7 years old.

“It was a gray morning,” says Zucker, a na­tive of northern New Jersey. “We came through the tunnel and Yankee Stadium was the most immaculate green field [that it] took my breath away.”

At Hamilton College in New York, she majored in creative writing, perhaps an unexpected field of study for one of the most powerful women in sports. But Zucker, a huge advocate for liberal arts education, says hers taught her how to write well and to craft a convincing argument—something she used to land her job at the Clippers.

Steve Ballmer purchased the Clippers in August 2014. Zucker heard the announcement while she was listening to the radio and went into overdrive. She’d been president of the Auto Club Speedway (the largest racetrack on the West Coast) for nine years and few alternatives would have tempted her to leave. But this opportunity was too good for her to pass up.

Getting hired wasn’t easy. Ballmer was looking for a candidate with NBA experience, something Zucker lacked, despite her decades in the sports industry. Also, Zucker didn’t know Ballmer, so she relied on her extensive network to suggest he meet with her.

“I stalked him!” she says with a laugh. “I was absolutely convinced that this was the most exciting opportunity for somebody in the sports business. I thought if he would just meet me, I was certain he’d hire me.”

That was four years ago. When hiring her own people, Zucker’s motto is: “Hire for ­attitude.”

During her senior year in college, Zucker interned at a minor league hockey team, thinking she might go into sports journalism. Instead, she became fascinated by the team’s operations. Once the internship ended, she was hooked, and the team hired her.

Zucker went from hockey to football, spending time at a major public relations agency whose main client was NFL Properties. From there, she worked at a startup football league, a joint venture between the NFL and NBC. Following many years in minor league operations, her big break came when International Speedway Corporation recruited her to lead the development of a speedway in Kansas. She then moved to Daytona before being sent to Fontana to run the Auto Club ­Speedway. She was Ballmer’s first major hire after he joined the Clippers.

For Zucker, part of a very small cadre of high-powered women in the sports industry, obstacles like the glass ceiling are something she’s transcended with explosive force.

Her current office in Downtown LA is filled with a diverse group of women. Zucker’s director of business development, general counsel, vice president of community relations, and director of corporate communications are all female. That’s a big deal.

Zucker knows her position comes with scrutiny and the platform to inspire. She watched this responsibility be executed flawlessly by Lesa France Kennedy, CEO of International Speedway Corp, who was one of Zucker’s greatest mentors due to her ability to “create an enormous amount of loyalty while maintaining extremely high standards.” To women considering professional sports as a career, she says, “Come on, we need more of you!”

Known for her high energy, Zucker has been a driving force in numerous efforts to revamp the fan experience at Clippers games, including the Lexus Courtside Club, a high-end hospitality suite for guests sitting courtside.

One of her proudest achievements is the  team’s partnership with Bumble, the “female first” app that connects users across dating, friendship, and professional networks.

“It’s more than a sponsorship,” she says. “Our players are proud of this partnership because it reminds everyone how they want their own mothers, wives, sisters, and daughters to be treated. [Clippers Forward] Montrezl Harrell was so excited about the Bumble Empowerment Patch now worn on the team jersey that he wrote the hashtag #StrongerWithHer on his shoes for the game on the night the patch ­debuted.”

Giving Back to the Community

Ballmer and Zucker share a commitment to philanthropy that reaches deep into communities where the need is greatest. It’s not surprising that one of Zucker’s first major accomplishments was the re-launch of the LA Clippers Foundation.

In 2015, the Clippers donated $3M to City Year, a nonprofit organization that helps youth ages 17-24 from all backgrounds succeed in school and stay on course to graduate. It was the largest cash gift in the team’s history at the time—and the biggest private sector donation to City Year. To date, more than 600,000 young people have benefited.

Earlier this year, Ballmer announced a major gift to the Los Angeles Parks Foundation to renovate nearly 350 basketball courts in city parks by the year 2021. Partnering with Vision to Learn to provide free eye exams and glasses to more than 600,000 children within the Los Angeles Unified School District is another example of the team’s focus on philanthropy.

Zucker believes the Clippers offer fans a truly exceptional experience. To sell out games, “Fans must leave a game with more value than they expected,” explains Zucker.

In the fall of 2018, the Clippers will launch a new digital technology that uses artificial intelligence to enhance fans’ understanding of various plays. In partnership with Second Spectrum, a company in which Steve Ballmer is an investor, a new fan engagement platform during live action will become part of enhanced home viewing. This immersive fan experience will be available on TVs, smartphones, PCs, and tablets. The second screen innovation will be the first of its kind for a professional sports team.

The Clippers’ broadcast rights agreement with FOX Sports Prime Ticket is making this possible, and the team announced beta testing for the 2017-18 season. The unique app is based upon Second Spectrum tech and Ballmer’s vision.

Perhaps the team’s most high-stakes project is the new $1B stadium in Inglewood. Zucker is committed to building a stadium that isn’t shared with the Lakers and Kings, like the current set-up at STAPLES Center. Currently in the Environmental Impact Review process, if all goes as planned, the stadium could open in 2024.

Early in her career at International Speedway Corporation, Zucker needed to learn as much as possible about its day-to-day operations. In the process of building a new facility, Zucker knew it needed to work for all different types of stakeholders so she spent time with people who ran various parts of the operations. But it was the day she spent with the track accident pickup team that is forever seared in her memory.

On February 18, 2001, Zucker was with the emergency response team in the care center when Dale Earnhardt was in an accident in the last lap of the Daytona 500 that proved fatal.

“That experience is one that will stick with me for the rest of my life,” she says. “It impacted the organization and the people who knew him, but they were resilient and took a tragic situation and turned it into something that became a real legacy.”

Zucker’s whirlwind schedule requires flexibility. “Every day is different,” she says. The one thing she works hard to make not optional is her four-times-­a-week workout. “I have fitness equipment everywhere—at work, at my home, and a gym membership, so there’s no excuse.”

With Ballmer at the helm, the Clippers are a technology-driven business. To start her day, Zucker checks her emails and text messages and returns phone calls. Keeping up with the news and social media is extremely important since something can happen overnight in the sports industry, the league, or the world that impacts her business. “I have to be ready to pivot to what’s happening in the fast-moving world today.” end

On My Wrist
Made With Love ­Bracelets from Africa

Business Over a Drink
Bar Toscana 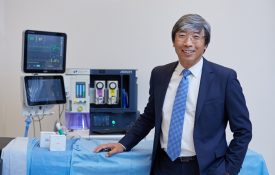