Fine Art for a Beautiful and Professional Office Artificial Intelligence (AI) and Machine Learning are coming faster than you think. Are you and your business ready for it? Ian Siegel: Finding the Needle in the Haystack

resource that has revolutionized recruiting

What grew out of a frustrating experience hiring talent six years ago is now a company with more than 500 employees in offices around the world. As the technology available for job seekers evolves, so does ZipRecruiter CEO Ian Siegel, as his company makes big plans to disrupt recruiting even more.

ZipRecruiter has had tremendous growth in 2016 and, after changing its product strategy from delivering volume to quality, is making plans for that growth rate to accelerate in 2017. “I used to say we sell haystacks. We don’t sell needles. Now, we’ve moved into the needle business,” Siegel says.

Prior to 2016, Siegel says, employers would post jobs and ZipRecruiter would surface a number of quality candidates over the course of 30 days. Now, when an employer posts a job, Siegel says ZipRecruiter sifts through the job descriptions and matches them with the resumes of more than 10 million job seekers each month. Those job seekers are notified by text or email that a position that fits their skill set is available, and in less than an hour, the employers receive their resumes.

“I used to say we sell haystacks. We don’t sell needles.
Now, we’ve moved into the needle business.”

It’s a process Siegel calls the Magic Five: “Fundamentally this changes the experience you’re having with recruiting because you’re used to posting a job and then waiting before you can start interviewing candidates. Now, you post a job and while you’re sitting at your computer you’re seeing candidates popping up on your screen!” As a result, recruiting is a now a real-time exercise. Hiring employees used to take up to eight weeks, but Siegel says Magic Five is now compressing that process into seven days. “The market has responded with great positivity to the improvements we’re making. The velocity of employers signing up for our service has doubled this year and it’s still accelerating,” he says.

Siegel credits specialization as instrumental in ZipRecruiter’s growth. He points out that it took discipline to find the proper specialists as ZipRecruiter grew from 85 to 400 employees. “It forces you to look into the mirror and think, are you the right guy? I need to put a lot of faith and trust into people we are hiring who are better at certain things than I will ever be,” Siegel says.

The secret to Siegel’s success is the New Year’s resolution he keeps year after year to  listen better. “I really try to listen to as much feedback and wisdom as I can from peers and mentors,” Siegel says. He also practices “in the moment, honest feedback.” Both leadership skills are reinforced by Siegel’s mentor, Jeff Zwelling. Siegel met Zwelling at a networking event where Siegel says the serial entrepreneur peppered him with questions about ZipRecruiter’s features. A ZipRecruiter customer at a marketing analytics company called Convertro at the time, Zwelling ultimately became Siegel’s in-house guru as ZipRecruiter’s Chief Operating Officer.

“We are crowdsourcing information necessary to train the algorithm.
As a result of it, our algorithm gets smarter every day.”

ZipRecruiter competes with the largest job company in the world, Indeed, and old school blue chips Monster and CareerBuilder. Siegel predicts LinkedIn and Glassdoor will also soon join in the midst of a substantial technological paradigm shift driven by job seekers using mobile devices. In less than three years, Siegel expects 90% of job seekers will be using mobile devices to find new jobs. The second change is more complicated and involves fine tuning ZipRecruiter’s algorithm with what’s called deep learning to make better matches for job candidates. As part of that process, ZipRecruiter now asks employers to add skills required for various jobs. “We are crowdsourcing information necessary to train the algorithm. As a result of it, our algorithm gets smarter every day,” Siegel says.

Still to come from ZipRecruiter, Siegel says, is an “Am I qualified?” feature that he hopes will provide further guidance for job seekers, instructing them on the quality of their resumes and how to better present themselves. Siegel’s definition of success? “Success to me is when job seekers enjoy the process of searching for a job and employers enjoy the process of finding talent.” 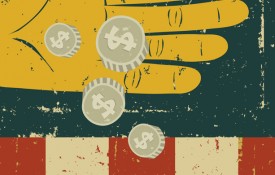