Brian Grazer: The Most Curious Man in Hollywood In the summer of 2008, Younan Properties was poised to execute a $600m public offering. It seemed like the right place and the right time. The real estate market, flush with eternal optimism, could not seem like a more secure industry. Of course, history tells a different story, and Zaya Younan’s company took a massive […]

In the summer of 2008, Younan Properties was poised to execute a $600m public offering. It seemed like the right place and the right time. The real estate market, flush with eternal optimism, could not seem like a more secure industry. Of course, history tells a different story, and Zaya Younan’s company took a massive hit when the market caved in shortly thereafter. The future seemed bleak. While the anxiety of impending failure lingered, Younan refused to throw in the towel. He forged ahead, keeping the faith that soon he would see the light at the end of a dark, crumbling tunnel.

“It’s easier to give up if you are the only one being impacted,” he points out in retrospect. “That was not the case here. As CEO, I [tried] to do what every great general does: stand in front of his army. [The general] should experience the first heat of battle, and he should be the last to leave.”

Younan made it his duty to work longer and harder than he ever had to ensure Younan Properties would make it out of the recession with a pulse. Still, he attributes his company’s emergence from the economic hardship to the tireless efforts of employees, with whom he felt personally responsible for during the economic hardship.

Still, the precipitous uncertainty of the recent past remains fresh in his mind. “This recession was the scariest, longest, deepest, and it was the most uncontrollable one ever,” he recalls. “Yet, we survived. We kept our core assets and were able to deleverage from eighty-five percent to sixty-five percent.” (This essentially means they were able to reduce the size of their debt.) The road has been a long one, but it is Younan’s survival instincts and unwavering zeal that makes him so admirable.

When asked about what the future holds for Younan Properties, the 50-year-old CEO responds with optimism. “We hope to continue to obtain large, quality assets and expand our company’s footprint,” he enthuses, adding that he aspires to grow Younan Properties into the largest private commercial real estate company in the country. While this is no small task, Younan feels he is now well-equipped to handle the recovering economy. “We’ve learned from our mistakes, and I think five years from now, when [CSQ] does a ten year edition with us, we will be a much larger company. We have grown five-hundred years during the last five years.”

For our second issue [Q2 2008], CSQ interviewed Zaya Younan, founder and chairman of Woodland Hills–based commercial realtor Younan Properties. At the time, the company was preparing to go public and had an ambitious outlook for the future. Then the real estate market tanked. In a new regular installment called Flash Forward, in which we revisit previous feature profiles, CSQ sat down with Younan six years later, this time to discuss how he successfully steered his company through the worst economic recession in U.S. history.
younanproperties.com 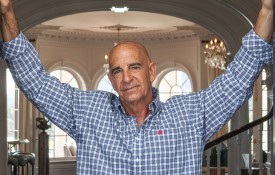 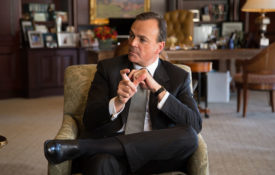