What You Need to Know About Cryptocurrency, NFTs, and the Blockchains That Power Them From Ego to Empathy: A CEO’s Perspective for Industry Transformation Joanne Heyler: Broadening the Arts in Los Angeles Since 1989

Joanne Heyler, founding director of The Broad, is the driving force behind eclipsing one and a half million visitors in under two years

Los Angeles is a global arts destination anchored by influential cultural fixtures like The Broad. An influx of diverse talent has emerged in the community, particularly since the contemporary art museum’s founding director Joanne Heyler steered The Broad Art Foundation and private Broad collection from its former home in Santa Monica to a new public unveiling downtown in 2015.

“I never would have guessed at that time that things would turn out this way and I’d be back on Grand Avenue,” says Heyler, who first learned of LA philanthropists Eli and Edythe Broad while working as a college intern at The Museum of Contemporary Art (MOCA). “There is a certain symmetry to that, which is kind of amusing to think about, but purely coincidental.”

Heyler launched her distinguished arts career while pursuing a bachelor’s degree in art history from Scripps College in Claremont. Uninspired by pre-set internship opportunities offered to fulfill a requirement at her school, the visionary trusted her instincts and contacted a museum that had caught her eye—MOCA (Museum of Contemporary Art), which was undergoing an exciting expansion into a new building on Grand Avenue. The museum happened to be overseen by founding chairman of the board, Eli Broad.

But the Broads  [constantly on the art scene] were collecting, meeting artists and going to studios.

Shortly after inquiring about internship opportunities at MOCA, Heyler was granted an interview one of MOCA’s curators at the time, Kerry Brougher, who now serves as director of the future Academy of Motion Picture Arts and Sciences museum. Hearing Brougher tell stories about the challenges of piecing together museum shows – including one about an artist who wanted his ashes sold at the museum store should he die during its show of his work -only made Heyler more intrigued, and she was hired.

Because the Broads were deeply involved in MOCA during the time of her internship, Heyler became acquainted with the couple. After graduating from Scripps in 1986, she briefly pursued more historical studies abroad and earned a master’s degree in the history of art from the Courtauld Institute of Art at the University of London in 1988, focused on 19th century European art and patronage. But upon returning to LA, the new graduate reconnected with Brougher, with the contemporary art scene of LA and other friends she had made in the art world to explore new professional opportunities.

Heyler was hired the next year as assistant curator at the Broad Art Foundation and made a name for herself at the organization’s small Santa Monica office. In 1995, she became Curator of The Broad Art Foundation, directing its lending library program and directly influencing its acquisitions. She helped the Broad collection mature from about 400 modern and contemporary artworks at the time to more than 2,000 today.

“It was a small office in an absolutely charming and beautiful building, with beautiful high ceiling galleries for the collection, just a half block from the beach, and quite private – completely unmarked” Heyler recalls. “I think I was one of four staff members in the beginning. We’d talk to the bustling New York art world on the phones, looking out over the Pacific Ocean.”

The Broads were high-profile collectors at the time, Heyler explains, and their art collection was focused on young emerging artists and modern culture, similar in style to the Maurice and Paul Marciano Art Foundation. The Broad Art Foundation’s mission was to share its artworks with public institutions that would then present the works in exhibitions for their respective audiences. The program has brought Broad collection artworks to more than 500 museums around the world.

“There was a real effort to be in that sense behind the scenes. We were very well known in the art world but fairly quiet as an institution; we weren’t making too many headlines” Heyler explains. “But the Broads were, and they were constantly on the art scene, collecting, meeting artists and going to studios.”

The Broads’ decision to turn their prized collection into a museum was complex. When the collection was much smaller 20 years ago, talks surrounded the idea of breaking it up into three or four different segments to donate to institutions that enjoyed close relationships with the Broads. Plans changed as public enthusiasm grew and the collection became more substantial in size and scope over decades.

The Broads never imagined that the growth of their collection would intersect with an artistic surge and development of more public art institutions in LA. Ambition led them to recognize that their collection carried an interesting profile, had value beyond its individual pieces—and now deserved a museum of its own.

“It just seemed like the right time for the city to include another institution,” Heyler says. “I think for Eli, too, thinking about trying to donate the collection to institutions already crowded with many works that spend as much time in storage as on the walls…for him, that was also a big factor.”

During early planning stages for the museum, business projections reached a few hundred thousand visitors per year. Instead, 1.5 million visitors have visited The Broad in its first two years. . There had been signs of The Broad’s success ahead of time: six months before opening day, Heyler installed video and sound art in The Broad’s unfinished third floor space and opened it to 3,000 members of the public for a one day viewing. , Advance tickets sold out in eight hours.

Opening The Broad did not come without its challenges related to increasing staff and perfecting the visitor experience. By remaining grounded in her long-term goals and staying true to her vision, Heyler says that she found success.

“I’m always thinking about this institution, not just about what’s going to happen next month or next year, but in a larger sense, where can it be in 50 years,” Heyler says. “I think about setting it on a course where it can be stable and vibrant and a real contribution culturally to this city.”

Long-term goals for the $140M space include expanding  its connections with school aged children and school groups, expanding its live programming, and always introducing new artists and ideas to a diverse public audience. The museum team chose a unique building designed to attract newcomers and eliminated unnecessary signage to foster better conversation between visitors and staff. The space does not include a reception desk, which Heyler says only creates a hierarchical barrier between visitors and the museum.

As Heyler has come to appreciate the rarity of the Broads’ civil dedication, she shares Eli’s belief that one can own art, but it’s never really theirs.

“Art is ultimately a human experience, and as a museum we are always trying to encourage dialogue, and talking with one another about what you’re seeing. It’s been incredibly meaningful that our audience has loved The Broad’s welcoming and visitor-centric focus” Heyler says. “There are many generous people in Los Angeles who’ve given funds to worthy causes, to institutions. The Broads’ philanthropy comes from determination to reach the public in large numbers and make LA and our society a better place. That sort of public-spirited quality has informed everything we do at The Broad. It is a quality that is extraordinarily pronounced in Eli and Edythe, and something that I’m really appreciative of as time goes by. It’s also very, very rare for someone to take it as far as they have.”

Passions
RAISING MY CHILDREN TO BE HAPPY AND FULFILLED, THE REST IS ORNAMENTAL 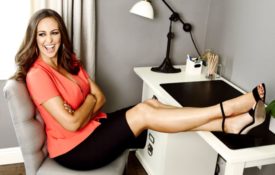 Cash Flow: From Paper to Plastic